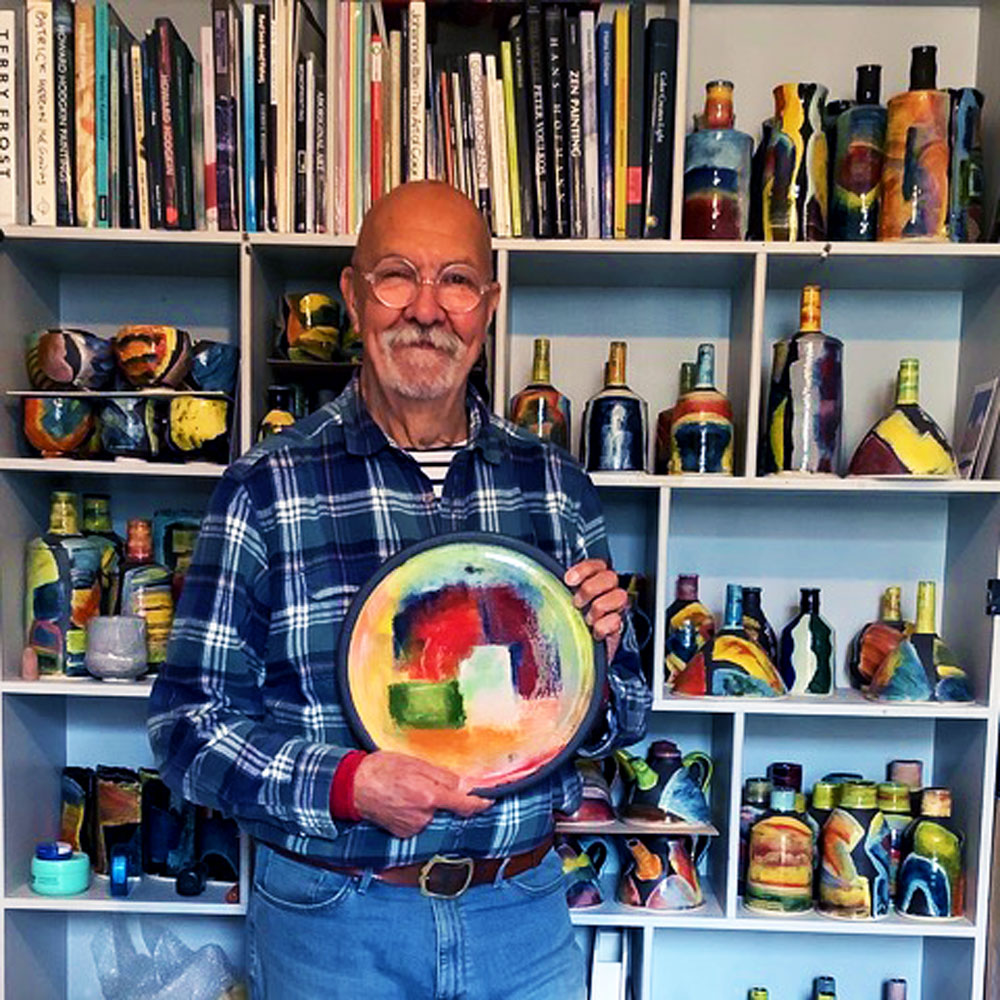 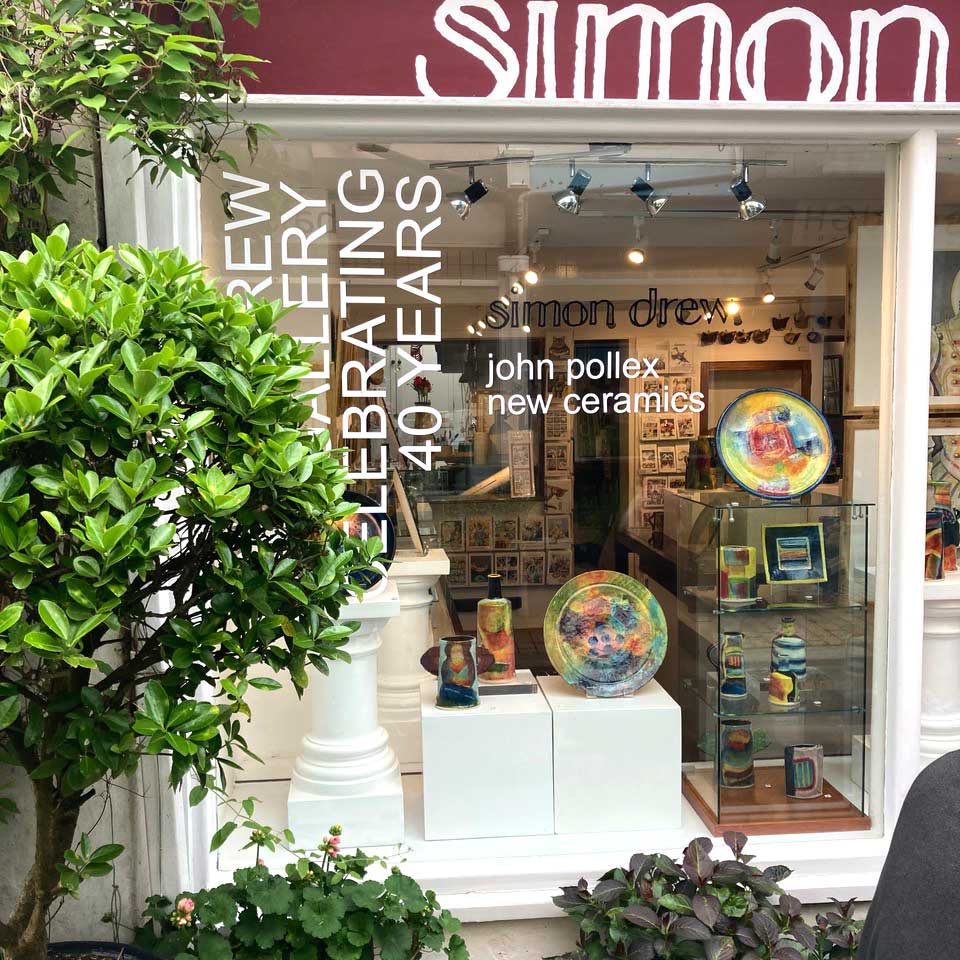 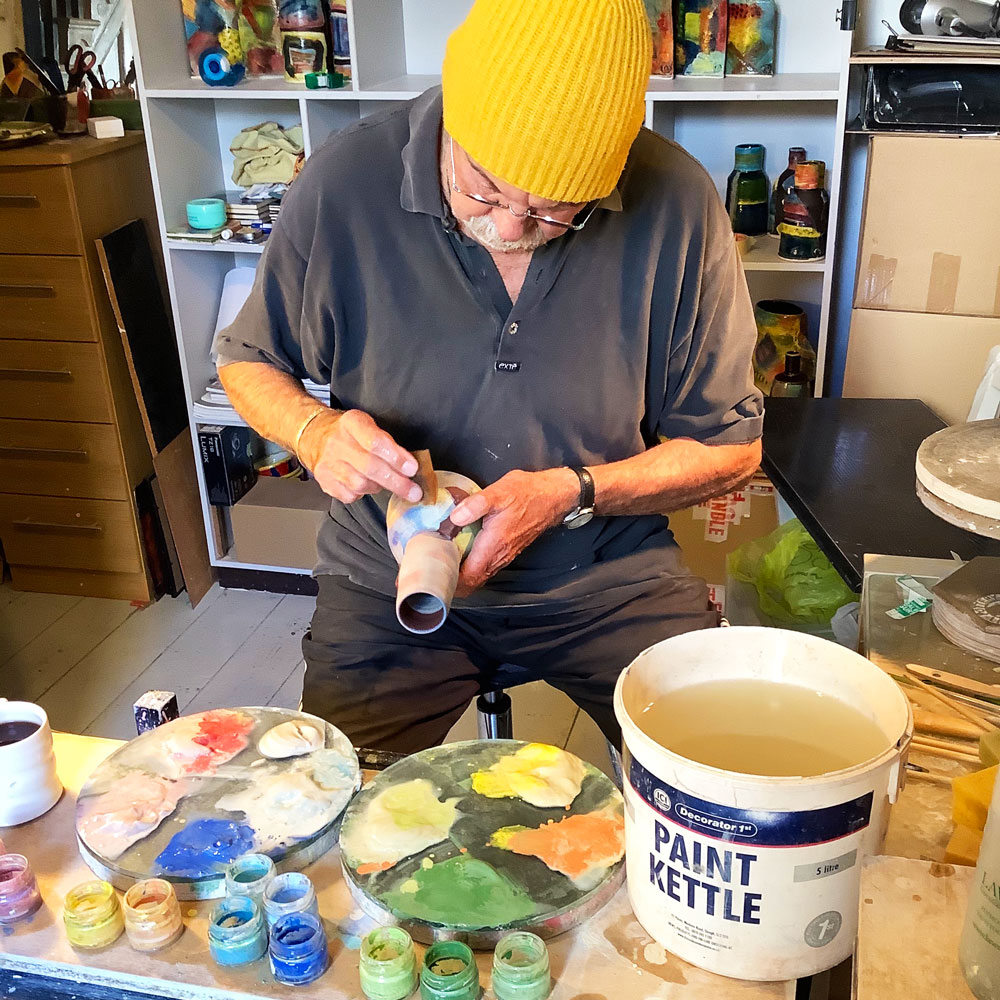 I got started in a rather unorthodox way, I was looking for what in Buddhist terms was called ‘right livelihood’. Through a mutual friend I met a young man named Anthony Kedros who was a student on the Harrow pottery course, this was around 1966. We had much in common and seemed to be on the same spiritual wavelength. So I thought maybe I could become a Potter. I left school one month after my 15th birthday, the quickest route for me to get started was to enrol somewhere as a vocational student. I enrolled at Sir John Cass School of Art in Whitechapel. Someone pointed me in the direction of the person in charge; she asked if she could help me. I said, “Yes I’d like to be a potter”. To which she replied, “Go home and change and come back this afternoon”.

That was a big turning point in my life, I went back that afternoon and a young student showed me how to wedge clay. He roared with laughter when I innocently asked if it hurt the clay! I had a friend who was the ceramics technician at Camberwell. I would often go there on Saturdays and watch the students working. I remember watching one of them throwing, she paused for a moment, looked at me and said; “it’s lovely stuff isn’t it”. About this time I met Ian Godfrey, I liked his work and his approach to it. We soon became friends and he allowed me to use his studio whenever I wanted to. Ian was a gentle and generous person; he always had time for others. Some Saturdays we would go to the Angel antiques market where he would hunt for Jade objects. I used to like watching him do this; he seemed to have mastered the art of seeing the beauty in objects that most people missed.

I stayed at Sir John Cass for 18 months working part time as sceneshifter and driving a mobile canteen for a firm of film location caterers. I was then lucky enough to become the technician at the Harrow Studio Pottery Course. This was another turning point for me; I was now amongst the premiership of British potters and thanks to Mick Casson and Victor Margrie I was given a free hand to more or less study alongside the students as long as my department jobs were fulfilled.

The two years I had at Harrow were great in so many ways, I had a day off each week to pursue my own work so I chose to join Colin Pearson for his throwing day. Colin and I struck up an immediate rapport with each other; he was to become my mentor and has remained so until the present day. The thing that got me was how free Colin, Mick, Wally, Brian, Mo and all the visiting staff were about giving information out. There were no secrets, just random acts of kindness eagerly accepted with open minds by everyone. Harrow for me was the Monastery of Mud for those two years.

After Harrow I became assistant to Brian Newman for six months and then went on to assist Colin until November 1971. It was during my time with Colin that he began applying wings to his pots.

During the 70’s my work developed and I was invited to demonstrate my skills at the Dartington Craft Camp. It was at this event I was approached by Pitmans to write a book about my work, “Slipware” now out of print. Podmore’s, now Potterycrafts – produced my slips commercially and invited me to travel to their overseas outlets and give seminars in Iceland, Holland and Austria.

In 1981 the New Zealand Society of Potters invited me take part in their annual symposium alongside Don Reitz the renowned American potter. Don and I were given a traditional Maori welcome in front of around 200 people. Both of us were reduced to tears by the depth of feeling showed to us by the Maori elders and N.Z. Potters. Don’s seminar was where the seeds were sown for my eventual move away from traditional techniques towards using colour.

It was now the mid 80’s – I developed a range of coloured slips, took the iron out of my glaze and started to experiment applying the colours with sponges and brushes. Eventually I went to see an exhibition of Sir Howard Hodgkin’s paintings at the Whitechapel Gallery. I noticed a large round painting entitled ‘Valentine 1978-84’. I imagined how that painting would look on a platter and from then on I started to work in a more painterly and abstract fashion.

What followed was an obsession with colour. The work of artists Robert Natkin, Mark Rothko, Hans Hoffman, Patrick Heron and David Hockney have been my main inspirations.

We use cookies on our website to give you the most relevant experience by remembering your preferences and repeat visits. By clicking “Accept”, you consent to the use of ALL the cookies.
Cookie settingsACCEPT
Manage consent

This website uses cookies to improve your experience while you navigate through the website. Out of these, the cookies that are categorized as necessary are stored on your browser as they are essential for the working of basic functionalities of the website. We also use third-party cookies that help us analyze and understand how you use this website. These cookies will be stored in your browser only with your consent. You also have the option to opt-out of these cookies. But opting out of some of these cookies may affect your browsing experience.
Necessary Always Enabled
Necessary cookies are absolutely essential for the website to function properly. These cookies ensure basic functionalities and security features of the website, anonymously.
Functional
Functional cookies help to perform certain functionalities like sharing the content of the website on social media platforms, collect feedbacks, and other third-party features.
Performance
Performance cookies are used to understand and analyze the key performance indexes of the website which helps in delivering a better user experience for the visitors.
Analytics
Analytical cookies are used to understand how visitors interact with the website. These cookies help provide information on metrics the number of visitors, bounce rate, traffic source, etc.
Advertisement
Advertisement cookies are used to provide visitors with relevant ads and marketing campaigns. These cookies track visitors across websites and collect information to provide customized ads.
Others
Other uncategorized cookies are those that are being analyzed and have not been classified into a category as yet.
SAVE & ACCEPT